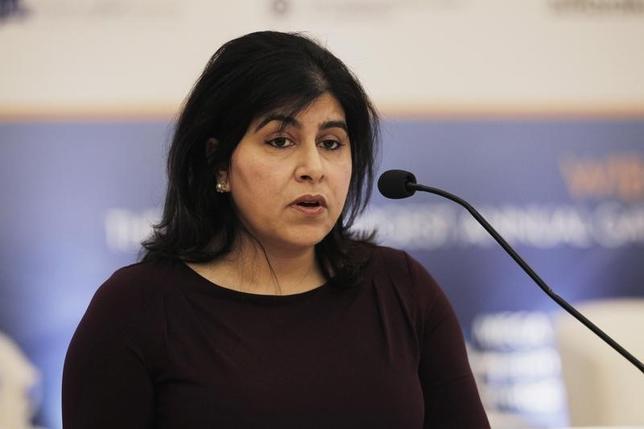 Member of House of Lords in Britain, Baroness Sayeeda Warsi speaks during the World Islamic Banking Conference in Manama, December 2, 2014.
REUTERS/HAMAD I MOHAMMED

A senior British politician on Monday accused those campaigning for Britain to leave the European Union of spreading lies, hate and xenophobia, saying she was switching to the “Remain” camp.

Britons will cast their votes on Thursday in a referendum on whether to quit the 28-member bloc, a choice with far-reaching economic and political consequences for Britain and the rest of the continent.

Sayeeda Warsi, a former minister and co-chair of the ruling Conservative Party, accused “Leave” campaigners of wrongly suggesting that staying in the EU would lead to vast numbers of Turks and Syrian refugees coming to Britain in the near future.

“Are we prepared to tell lies, to spread hate and xenophobia just to win a campaign? For me that’s a step too far,” she told The Times newspaper.

“I don’t want the Leave camp to be running this country and I don’t want the messages coming out of that camp to form the basis of the kind of Britain that I want to live in and to bring my kids up in,” she said.

The official Vote Leave organization was dismissive, with a spokesman saying they did not remember Warsi joining their campaign and were puzzled by her announcement. Warsi had not played a prominent role in the “Leave” campaign but said she had long made the case for quitting the EU.

The “Leave” camp’s key argument has been that Britain would be unable to control immigration levels as long as it was in the EU, while the “Remain” campaign has focused on the economic risks a Brexit, or British exit, would pose.

The tone of the arguments had become increasingly vitriolic until the murder on Thursday last week of opposition Labour lawmaker Jo Cox, a passionate Remain campaigner, changed the atmosphere.

The House of Commons, which was not supposed to be sitting this week, was being recalled on Monday for lawmakers from across the political spectrum to pay tribute to Cox, the first of their number to be murdered since 1990.

Campaigning for the EU referendum resumed on Sunday after a three-day pause following Cox’s murder.

Three opinion polls showed “Remain” recovering some momentum in the wake of her death, but the overall picture remained one of an evenly split electorate.

The British pound gained nearly 2 percent against the dollar on Monday, boosted by the shift in the polls, rising as high as $1.4625 GBP=D4, its highest level since June 7.

The probability of a “Remain” vote implied by Betfair betting odds rose to 72 percent on Monday, up from a range between 60 and 67 percent on Friday.

Brexit: What will immigration look like out of the EU? – CNN.com

51 mins ago – Toyota, GM and BMW warn against Brexit … said a vote to leave the EU (the so-called Brexit) could damage the U.K.’s booming car industry.

Brexit: Why so many British scientists want Britain to stay … – CNN Money

6 days ago – Sarah Morgan has made up her mind about Brexit: Britain must remain in the European Union or risk losing vital access to scientific research …

‘Brexit’: Why curry chefs want out of EU – CNN.com

Jun 8, 2016 – At the same time, the shadow of a possible “Brexit” looms large over practically every debate on foreign and EU politics in Berlin these days.

Can you pass the Brexit test? – CNN Money

4 days ago – Britain will vote on June 23 whether to stay in the European Union. It’s a decision that will impact the country for decades to come. Take this …

7 days ago – Britain’s referendum on whether to remain a member of the European Union or vote for Brexit is less than two weeks away. Here’s why it …