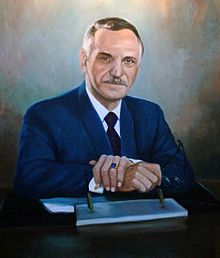 From Wikipedia, the free encyclopedia
This article is about the 3rd governor of Puerto Rico. For his granddaughter, see Loren Ferré Rangel.
This name uses Spanish naming customs: the first or paternal family name is Ferré and the second or maternal family name is Aguayo.
Luis A. Ferré
Engineer

Luis Alberto Ferré Aguayo (February 17, 1904 – October 21, 2003) was a Puerto Rican engineer, industrialist, politician, philanthropist, and a patron of the arts. He was the third Governor of the Commonwealth of Puerto Rico, serving from 1969 to 1973. He was the founding father of the New Progressive Party, which advocates for Puerto Rico to become a state of the United States of America. He is a recipient of the Presidential Medal of Freedom.

Luis Alberto Ferré Aguayo was born in the southern city of Ponce, Puerto Rico on February 17, 1904. Ferré’s grandfather was a French engineer who was involved in the construction of the Panama Canal before settling in Cuba.[1] Ferre’s father, Antonio Ferré, was born in Cuba and grew up there. As a young man he immigrated to Puerto Rico, where he founded the company Puerto Rico Iron Works, in Barrio Playa de Ponce, Ponce, Puerto Rico.[1][2] In Puerto Rico Ferré met and married Maria Aguayo Casals, a cousin of Catalan cellist Pablo Casals, whose mother was Puerto Rican.[1] Antonio and Maria had four sons, Luis, José, Carlos and Hermán Ferré, and two daughters, Rosario and Catholic nun Isolina Ferré.[1]

Ferré studied Mechanical Engineering at the Massachusetts Institute of Technology, obtaining his bachelor’s degree in 1924 and master’s degree in 1925, and music at the New England Conservatory of Music.[3] During this time while living in Boston, Ferré developed an admiration for the «American way of democracy».[4]

Upon his return to Puerto Rico, Ferré helped transform his father’s company into a successful business from which he earned a fortune. In 1948, he acquired El Día, a fledgling newspaper that was later renamed El Nuevo Día, becoming the newspaper with the largest circulation in Puerto Rico at the time. In the 1950s, Ferre’s Empresas Ferré (Ferre Enterprises) acquired Puerto Rico Cement and Ponce Cement, which capitalized on the economic boom which Puerto Rico enjoyed based on the ambitious industrialization projects undertaken in association with the Operation Bootstrap. Ferré’s brother, Jose, had moved to Miami with his family. His son Maurice expanded a successful business there, selling bagged pre-mixed cement under the name Mezcla Lista. Maurice Ferre was elected as Mayor of Miami.

Ferré became active in politics in the 1940s. He unsuccessfully ran for mayor of Ponce in 1940 and Resident Commissioner of Puerto Rico in 1948.

In 1948, Puerto Ricans were allowed to elect their governor; previously the position was filled by appointment by the United States president. Luis Muñoz Marín was elected governor of Puerto Rico. A movement began which aimed to adopt a commonwealth relationship with the United States of America. In 1951, a referendum was held to decide whether to approve or not the option granted by the United States Congress to draft Puerto Rico’s first constitution. Ferré abstained from participating in the process; the pro-statehood party to which he belonged favored the 1951 referendum. He believed that the process would mean «an acceptance of a colony and condemn the people to a perpetual condition of second class citizenship». Ferré later participated in the constitutional assembly created by the referendum, which drafted the constitution.[5]

On July 23, 1967, a plebiscite was held to decide if the people of Puerto Rico desired to become an independent nation, a state of the United States of America, or continue the commonwealth relation established in 1952. The majority of Puerto Ricans opted for the Commonwealth option (see Puerto Rican status referendums). Disagreement among the current pro-statehood party led by Miguel A. García Méndez led Ferré and others to found the New Progressive Party or PNP.

In the following general election in 1968, Ferré ran for Governor and defeated Luis Negrón Lopez, the candidate of the Popular Democratic Party (PPD) by a slight margin. The ruling party had split with the creation of the People’s Party, which ran incumbent PDP-elected Governor Sánchez Vilella as its gubernatorial candidate, ending Luis Muñoz Marín‘s PPD’s hold on the governor’s seat, which had lasted 20 years.

During Ferré’s administration, Puerto Rico was in an economic boom at 7% GDP Growth and the unemployment at 10%, the lowest until 1999. His work as governor of Puerto Rico included defending the federal minimum wage and granting workers a Christmas bonus. He visited Puerto Rican troops in Vietnam. In 1970 his first wife, Lorencita, died at La Fortaleza after being bed-ridden for years. Their daughter, Rosario Ferré, an acclaimed novelist and writer, stepped into the role of First Lady.

During his governorship, he paid special attention to youth affairs and bringing young Puerto Ricans into public service. He successfully had the Puerto Rico Constitution amended to lower the voting age to 18, strongly supported the New Progressive Party Youth organization as party president, and appointed then-young statehooders such as Antonio Quiñones Calderon and Francisco «Pompi» Gonzalez to high-level administration jobs, campaigned for a 26-year-old at large House candidate, nominated a future Senate President and Secretary of State, teenager Kenneth McClintock as Puerto Rico delegate to the 1971 White House Conference on Youth, and strengthened college scholarship programs.

Before the Congress created the United States Environmental Protection Agency in 1971, Ferré had already created Puerto Rico’s Environmental Quality Board in 1970,[6] charged with protecting the islands’ environment.

In the elections of 1972 he sought reelection but lost to Rafael Hernández Colón of the PPD. The PPD had claimed that many corruption scandals (rather minor compared to similar ones in the various administrations following Ferré’s) had been overlooked by the Ferré administration. A bloody student strike at the University of Puerto Rico at Rio Piedras in 1971 had been neutralized by the Puerto Rican police using brute force, something about which Ferré had mixed feelings. Hernández played the youth card in his campaign (when elected he was the youngest Puerto Rican governor). All these issues, along with the reunification of the People’s Party and the PDP, contributed to a PDP win over Ferré in the election.

Ferré remained active in politics and in 1976, he was elected to the Senate of Puerto Rico. Ferré served as the eighth president of the Senate from 1977 to 1981 and continued serving as senator until 1985.

Awarded the Presidential Medal of Freedom in 1991

Ferré was also a talented pianist who recorded several albums of his piano music. On January 3, 1959 he founded the Museo de Arte de Ponce, in his hometown of Ponce.[7] The museum initially displayed 71 paintings from his personal collection and today displays over 3,000 pieces. Among other things, Ferré is credited with having rescued from oblivion the painting Flaming June by the Victorian painter Frederic Lord Leighton – purchasing it in 1963, when it was considered «too old fashioned» and getting it prominently displayed at the Museo of Arte de Ponce.

«El Centro de Bellas Artes», the center for performing arts in Santurce, Puerto Rico also bears his name, as well as the main highway connecting San Juan and Ponce. He also assisted in the creation of the Casals Festival and the Puerto Rico Conservatory of Music. He was a member of Phi Sigma Alpha Fraternity. As a sportsman, Ferré practiced fencing, and is honored annually with the «Campeonato Nacional de Esgrima» in Puerto Rico.

His philanthropic deeds and defense for democracy earned him the Presidential Medal of Freedom, awarded by President George H. W. Bush on November 18, 1991.[8]

Sculpture of Ferré inside the Capitol of Puerto Rico

On September 29, 2003, Ferré was hospitalized with a urinary tract infection and underwent surgery for an intestinal blockage on October 1. While in the hospital he developed pneumonia before finally succumbing to respiratory failure on the morning of October 21, 2003.

His body lay in state in Puerto Rico’s capitol building in San Juan, then transported to his museum in Ponce, before being taken for a state funeral and burial in that city. His funeral and ceremonies honoring him were attended by numerous politicians. He is interred at the Las Mercedes Cemetery in Ponce.[9]

Among the awards that were bestowed on Luis A. Ferré was the Presidential Medal of Freedom, an honor which was also subsequently bestowed on his sister Sor Isolina Ferre. The sculptor Tomás Batista was also commissioned to make a bust of Ferré, which is exhibited in the Ponce Museum of Art. Another Tomás Batista bust of him was unveiled by his widow, Tiody, Senate President Kenneth McClintock and Senate Vice President Orlando Parga in February, 2008 at the Senate of Puerto Rico‘s Hall of Governors.

The segment of Las Américas Avenue that includes the Museo de Arte de Ponce and the Pontifical Catholic University of Puerto Rico was renamed the Luis A. Ferré Boulevard in November, 2010, in his honor.