Ten ways the Ukraine crisis may change the world

Ten ways the Ukraine crisis may change the world 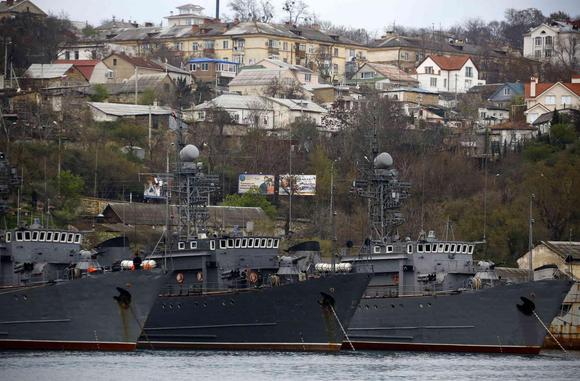 Russian Navy vessels are anchored at a navy base in the Ukrainian Black Sea port of Sevastopol in Crimea, March 28, 2014.

(Reuters) – As Moscow and the West dig in for a prolonged stand-off over Russia’s annexation of Crimea, risking spillover to other former Soviet republics and beyond, here are 10 ways in which the Ukraine crisis could change attitudes and policy around the world.

1) Russia diminished: Russia’s role in international affairs is diminished, at least temporarily. Moscow has been de facto excluded from the Group of Eight industrialized powers. Its bids to join the Organisation for Economic Cooperation and Development and the International Energy Agency are frozen. Western summits with Moscow are canceled until further notice.

President Vladimir Putin’s attempt to use the BRICS group of emerging powers to mitigate isolation by the West faltered over Chinese and Indian unease at the Crimean precedent for disputes about Tibet and Kashmir. A joint BRICS statement condemned sanctions but made no mention of Crimea or Ukraine.

2) NATO revived: Just when it looked to be losing relevance as its mission in Afghanistanlimps to a close, the U.S.-led military alliance is back in business. An increase in allied air patrols and war games showing the flag in Poland and the Baltic states is on the agenda, and Warsaw wants faster deployment of U.S. missile defense systems in central Europe.

Under U.S. pressure, some European countries may rethink cuts in defense spending. Neutral Sweden and Finland, perceiving Russia anew as a potential threat, may increase security efforts and cooperate more closely with NATO.

3) Energy diversification: The energy map of Europe is being redrawn with accelerated action to reduce dependence on Russian oil and gas. EU states are set to build more liquefied natural gas terminals, upgrade pipeline networks and grids and expand a southern gas supplies through Georgia and Turkey to southern and central Europe.

The EU gets a third of its oil and gas from Russia, and 40 percent of that gas is pumped across Ukraine. Europe may now look to tap its own shale gas reserves and expand nuclear power, despite environmental concerns.

«I see the danger of more nuclear – which is C02-free, which is also part of the discussion, but it is the wrong path,» said Gerhard Roiss, chief executive of Austria’s OMV, a big importer of Russian gas into central Europe.

4) China factor: The diplomatic alliance between Russia and China, which often vote together in the U.N. Security Council, could change in one of two directions – either rapprochement through a stronger energy partnership, with new pipelines being built to pump Russian oil and gas spurned by Europe to Beijing; or a cooling if China distances itself more from Putin’s behavior and sees less benefit in closer ties with an economically weakened and relatively isolated Moscow. For now, President Xi Jinping is refusing to take sides in public.

5) U.S. leadership: Washington’s global leadership role, weakened by the rise of emerging powers and by retrenchment under President Barack Obama, has been partially restored.

Despite his disengagement from wars in Iraq and Afghanistan and strategic «pivot» towards Asia, events have pushed Obama back into the old-fashioned role of «Leader of the Free World» in an East-West crisis in Europe.

The crisis has swept aside European anger over U.S. spying on global communications and put a new premium on cooperation. In Brussels last week Europeans appealed to Obama to sell them shale gas, and both sides agreed to speed talks on a transatlantic free trade and investment pact.

Yet U.S. strategists say American economic interests and the security challenges of managing a rising China mean Asia will remain the priority and Europe will have to do more for itself.

Her disenchantment with him has shaped an increasingly firm crisis response after initial hesitancy. German willingness to reduce energy dependency on Russia will be the yardstick of how far the rest of the EU goes. Merkel is also the relationship manager with the volatile Yulia Tymoshenko, whose presidential bid may heighten tension in Ukraine.

7) EU united: The European Union has been reunited, at least for now, by the return of a common external threat. This may have helped EU leaders overcome some long-running disputes.

Greens European Parliament member Rebecca Harms joked that it was too early to nominate Putin for the annual Charlemagne prize for services to European unity, «but in the face of a new threat of war in Europe, EU states have indeed agreed on a joint strategy towards Russia.»

Some EU diplomats say Poland may speed up slow-motion moves to join the euro, seeking sanctuary in Europe’s inner core as the Baltic states have done. Polish entry would hasten the spread of the single currency to almost all EU countries, including Denmark, though probably not Sweden or Britain.

8) Contest for Central Asia: both Putin and the West are wooing central Asian autocrats in energy-rich Azerbaijan, Kazakhstan, Turkmenistan and Uzbekistan, drawing a discreet veil over their human rights records. If Russia weakens economically, they will want at least a foot in the Western camp.

9) U.S.-Russian cooperation: some cooperation on global security issues will continue because Moscow has an interest in keeping it on track to avoid greater isolation. But tensions are possible over Syria, Iran, Afghanistan or North Korea, and Moscow has levers it could activate such as contracts to supply S300 air defense missiles to Damascus or Tehran.

10) Putin’s future: Russia’s leader is near the peak of his popularity, riding a wave of nationalist pride over Crimea. However, instability may grow if he comes under pressure from magnates angry at losing value on their businesses, forfeiting foreign investment in Russia and facing travel restrictions and asset freezes in the West. Most are 150 percent loyal for now, but things may look different in six months’ time. 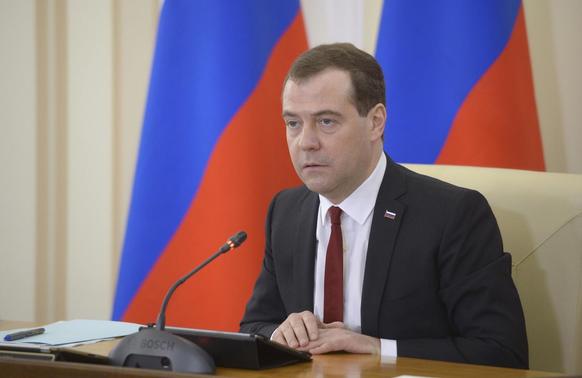 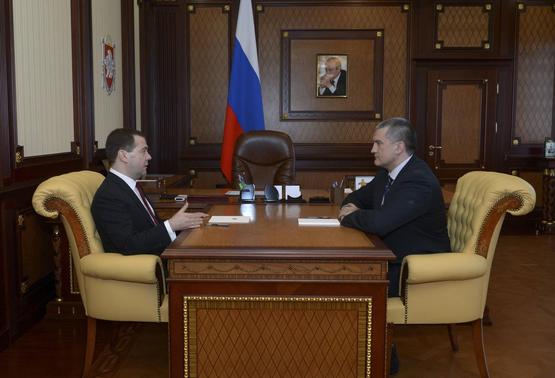 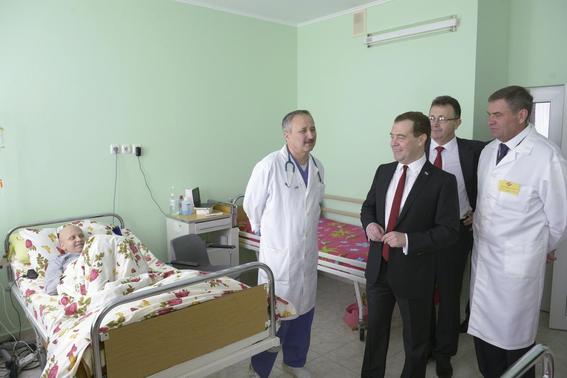 Kerry: «No decisions about Ukraine without Ukraine»

(Reuters) – Prime Minister Dmitry Medvedev flaunted Russia’s grip on Crimea on Monday by flying to the region and announcing plans to turn it into a special economic zone, defying Western demands to hand the region back to Ukraine.

The visit, hours after Russia held talks on Ukraine with the United States, is likely to anger Kiev and the West, which accuse president Vladimir Putin of illegally seizing the Black Sea peninsula after a March 16 referendum they say was a sham.

Shortly after landing in Crimea’s main city of Simferopol with many members of his cabinet, Medvedev chaired a Russian government meeting attended by Crimean leaders and outlined moves to revive the region’s struggling economy.

«Our aim is to make the peninsula as attractive as possible to investors, so that it can generate sufficient income for its own development. There are opportunities for this – we have taken everything into consideration,» he told the televised meeting, sitting at a large desk with Russian flags behind him.

«And so we have decided to create a special economic zone here. This will allow for the use of special tax and customs regimes in Crimea, and also minimize administrative procedures.»

In comments that made clear Russia had no plans to give back Crimea, he set out moves to increase wages for some 140,000 state workers in Crimea, boost pensions, turn the region into a tourism hub, protect energy links with the peninsula and improve its roads, railways and airports.

Russia’s swift takeover of Crimea, following the ouster of Moscow ally Viktor Yanukovich as Ukraine’s president in late February, has caused the biggest crisis in East-West relations since the Cold War.

Medvedev’s visit underlined the impotence of the West and Ukraine to force Russia out following the formal annexation of Crimea, signed by Putin, on March 21.

The United States and European Union have imposed sanctions on Russian officials, lawmakers and allies of Putin. They are threatening broader measures if Russia, which has forces massed near Ukraine’s eastern border, seeks to take more territory.

The absorption of Crimea and its 2 million residents creates an additional financial burden on Russia, which is struggling with slow growth, rising inflation, a weak currency and unusually high capital flight this year.

But Medvedev’s remarks indicated the Kremlin hopes Crimea, which he said had «colossal prospects» for tourism income, will become quickly self-sufficient.

Finance minister Anton Siluanov said last week that Russia would spend up to 243 billion roubles ($6.82 billion) in Crimea this year, to be financed from the budget reserve.

The ultimate cost of its action in Crimea is likely to be far higher: analysts in a Reuters poll last week slashed their forecasts for Russian economic growth.

The region has an estimated 55 billion rouble budget deficit, and the peninsula has been dependent on Ukraine for 85 percent of its electricity, 90 percent of its drinking water and much of its food.

The reliability of those supplies is now in question. The local authorities have said they will nationalize Ukrainian state-owned business, including energy producer Chernomorneftegaz which is exploring for oil and gas offshore.

Apart from hosting a Russian naval base, Crimea’s biggest industry is tourism as one of the former Soviet Union’s few warm seaside resorts. But until now, 60 percent of visitors arrived from other parts of Ukraine, mostly by train.

Making it an attractive destination for Russians will be more difficult, since they mainly arrive by air and have a wider choice of holiday destinations. Crimea would have to compete with Bulgaria, Turkey, Greece and Egypt, as well as Russia’s own brand new $50 billion Black Sea Olympic resort in Sochi.

Kerry said after talks with Lavrov in Paris on Sunday that progress on resolving the crisis over Ukraine depended on a Russian troop pullback from Ukraine’s borders.

Moscow has said the buildup is part of Russian military exercises. It wants assurances that Russian-speaking regions in eastern and southern regions of Ukraine have extensive autonomy and wants Russian established as the second state language.